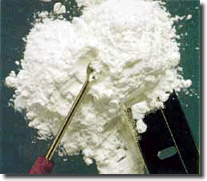 Cocaine is extracted from the leaves of the coca bush that is primarily grown in the high mountain ranges of South America. Cocaine is a powerfully addictive central nervous system stimulant that directly affects the brain. Cocaine is classified as a Schedule II drug, meaning it has a very high potential for abuse and addiction and may lead to severe psychological, physical dependence or addiction.

Cocaine is presently the most abused major stimulant in America. It has recently become the drug most frequently involved in emergency department visits. It is not a new drug of abuse but is now considered the caviar of recreational drugs. Thus, this distinction is reflected in its description such as, champagne of drugs, gold dust, Cadillac of drugs, status stimulant, yuppie drug, and others.

Cocaine is generally sold on the street as a fine, white, crystalline powder, known as “coke,” “C,” “snow,” “nose candy,” or “blow.” Street dealers generally dilute it with such inert substances as cornstarch, talcum powder, and/or sugar, or with such active drugs as procaine (a chemically related local anesthetic) or with such other stimulants as amphetamines.

Cocaine can be snorted or smoked or dissolved in water and then injected. Using cocaine makes a person feel euphoric, confident, bold and full of energy. Cocaine also raises blood pressure , increases heart rate , causes rapid breathing , tenses muscles and causes jitters. This can cause a cocaine-induced stroke --even after the first time you use it. Over time, and with regular use, people may get paranoid, anxious and confused, and sometimes they hallucinate. Insomnia , agitation and depression can also result from frequent cocaine use.

When cocaine is snorted, the effects begin in a few minutes, peak in 15 to 20 min and lasts approximately 1 to 3 hours. When injected or smoked, cocaine effects occur faster and are over sooner.

Those who become addicted to cocaine experience powerful cravings that overtake their ability to stop using cocaine on their own, even in the face of devastating consequences. Cocaine addicts may display marked changes in behavior and attitude as the length of addiction grows longer over time. Relationships with family members and friends can deteriorate rapidly, performance at work and/or school can become dramatically decreased. Often a cocaine addict will lie to cover his or her using habits and can often be pushed into a life of crime to help finance their cocaine addiction. In the long-term, it is difficult to hide cocaine addiction for any length of time.