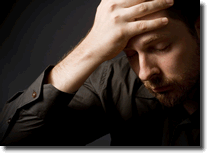 Cocaine withdrawal happens when a regular cocaine user stops using cocaine or tremendously cuts down use. When cocaine indulgence ends, the "cocaine crash" quickly sets in. This crash causes the cocaine user to have extreme fatigue, sleepiness, anxiety and depression along with intense cravings for more cocaine.

Cocaine withdrawal symptoms are strongest during the first week after the last use, however, the cocaine craving and depression can last for months after heavy, long-term cocaine abuse.

Cocaine withdrawal symptoms will disappear over time however many cocaine addicts often use alcohol, sedatives, hypnotics, or anti-anxiety medications such as Xanax or Valium to mask their withdrawal symptoms. If these medications are not readily available, the addict is often misdiagnosed with depression or anxiety disorders and given medications from medical doctors who are not made aware of the persons cocaine addiction. The addict then becomes addicted to the medications and is trading one addiction for another.

Because of the intense cocaine craving as well as the depression and anxiety that occurs during cocaine withdrawal, it is important that cocaine withdrawal takes place under the supervision of medical professionals. Trained medical personnel can help create a comfortable, supportive environment for the individual that will help them through this difficult time.