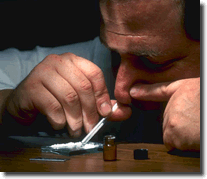 Cocaine is most commonly ingested by snorting cocaine powder (cocaine hydrocloride) into the nasal passages. With this route of administration is usually chopped into a fine powder with a razor blade on a small mirror or some other hard surface, arranged into small rows called "lines," then quickly inhaled (or "snorted") through the nose with a short straw or rolled up paper money. Snorting cocaine is the most popular method of use because of it's simplicity and effectiveness.

When snorting cocaine, the powder is absorbed into the bloodstream through the nasal tissues. The faster cocaine is absorbed into the bloodstream and delivered to the brain, the more intense the high. On the other hand, faster absorption usually means shorter duration of action, therefore the high from snorting cocaine is less intense compared to smoking or injecting but may last 30 minutes to 2 hours whereas the high from smoking or injecting cocaine is more intense but may last only 5 to 10 minutes.

Continued snorting or sniffing cocaine is physically damaging. Snorting cocaine can cause chronically runny nose, sneezing, nasal congestion, nosebleeds, loss of smell, hoarseness, problems swallowing and in severe cases it causes nasal ulcers which perforates the dividing wall of the nose called the septum. (Ulcers are breaks in the skin or mucous membrane, with festering, disintegration and loss of surface tissues). Eventually with continued cocaine use the septum will develop a hole in the cartilaginous dividing wall of the nostrils and will continue to grow as the cocaine habit continues. If enough tissue is destroyed, the septum can collapse.