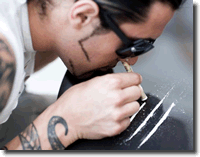 Facts about cocaine reveal the abuse of cocaine is a major public-health problem in the United States. In the 1970s, people began taking cocaine as a recreational drug. Experts believed that cocaine was harmless. Many movies and books from this decade show cocaine use as a popular, sophisticated social activity. By the mid-1980s, when many people were using cocaine in large quantities, experts and the public began to recognize the drug's dangers. Cocaine use can cause severe medical and psychological problems.

Cocaine (also known as "coke," "snow," "lady," "crack," and "ready rock"), is an alkaloid that can act both as a local anesthetic and as a stimulant. Facts about cocaine notes that users generally take cocaine in binges: They take the drug repeatedly for several days, and then use no cocaine for several days or weeks. Many users resist getting treatment. Users caught possessing or selling cocaine face stiff criminal penalties, but these punishments have not been effective at reducing the rate of heavy cocaine use. In fact, the number of people who used cocaine rarely or occasionally declined during the 1990s. However, the number of frequent or heavy users only decreased slightly.

Facts about Cocaine: Methods of Abuse

As an illegal drug, cocaine can be taken in a number of ways. These "routes of administration" include oral (by mouth), intranasal (through the nose), intravenous (by injection into the veins), and smoking. The effects of cocaine are similar no matter what the route. However, the way in which a person takes cocaine influences the likelihood that he or she will abuse it. This is because some methods of taking the drug act more quickly to increase levels of cocaine in the brain. The amount of cocaine in the brain determines the sensations that the user will feel. A person who gets the largest and quickest changes in cocaine brain levels is more likely to take the drug again.

Facts about cocaine show that cocaine abusers do not take cocaine orally, because cocaine taken by mouth is absorbed into the brain slowly. By this method, it takes more than a hour to reach peak brain levels of cocaine. Abusers are more likely to inhale cocaine into the nose as a powder. By this method, the drug is quickly absorbed from the mucous membranes in the nose. Because of its local anesthetic actions, cocaine numbs or "freezes" the mucous membranes. A person buying cocaine on the street will test its purity by inhaling a small amount to see if this numbing occurs. When cocaine is inhaled, or "snorted," cocaine blood levels peak about twenty to thirty minutes later. Users who inhale cocaine report that they are ready to take a second dose of the drug within thirty to forty minutes after the first dose. Snorting was the most common way for people to use cocaine in the mid-1980s. Later, users discovered that smoking or injecting cocaine gets the drug to the brain faster. These became the preferred methods for taking the drug.

When taken by intravenous injection, cocaine reaches peak blood levels immediately, and users experience a "rush." Brain levels of cocaine increase quickly, so the user feels the drug's effects just as quickly. As blood levels of cocaine decrease, so do the effects and users are ready for another intravenous dose within thirty to forty minutes. Facts about cocaine show users who inject cocaine are more likely to combine theircocaine with heroin (a combination known as a "speedball") than are users who take it in other ways.