Dangers of Cocaine Use 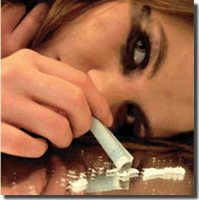 There are many dangers of cocaine use with the main health risk with cocaine is overdose. Most cocaine deaths have been caused by accidental overdose, especially with cocaine dissolved in drinks. There is no such thing as a "safe" dose of coke, and a person can overdose even if they have only ingested a relatively small amount of the drug. Cocaine overdose is not nice: victims suffer convulsions, heart failure, or the depression of vital brain centers controlling respiration, usually with fatal results.

Dangers of Cocaine Use: Heart Problems and Stroke

When someone uses cocaine, the rush they experience also causes a corresponding spike in his or her blood pressure and pulse rate. The user also experiences an increase in his or her respiration rate. Using the drug can trigger a stroke in some cases. This medical consequence of using coke can occur when the user's blood vessels constrict while his or her blood pressure increases rapidly. The constriction can be severe enough to restrict or cut off blood flow to the brain entirely.

Men under the age of 40 are most at risk for having a stroke as a result of using cocaine. In some cases, the cause of the stroke can be attributed to a malformation in the arteries or veins supplying the brain. In cases where a person has a stroke after using cocaine, they are more likely to experience the type caused by bleeding in the brain than one triggered by a reduction of blood flow to this important organ.

Dangers of Cocaine Use: Damage to the Nose

The other main physical danger you face is damaging or perforating the septum, the thin membrane that separates the nostrils at the top of the nose. Regular coke snorters often suffer instant nosebleeds when snorting the drug. Occasional users may detect next-day bloodied mucus and congestion. Heavy users have their septums dissolved by the corrosive effects of cocaine.

A person using cocaine may find that his or her sense of smell is impaired as a result of using the drug. Trouble swallowing is another one of the dangers of cocaine. One of the signs that may indicate a problem with cocaine addiction is seeing a person with a constantly running nose.

An individual who swallows cocaine may be creating the physical conditions required for them to experience bowel gangrene from lack of blood flow to this part of the body. Doing so to avoid being arrested for cocaine possession or because the individual is acting as a "mule" to transport the drug is a very risky thing to do.

If injecting cocaine is your delivery method of choice, you need to be aware that sharing needles puts you at a higher risk for developing HIV/AIDS. Allergic reactions are also not uncommon when the drug is administered in this way.

A cocaine user who binges on the drug can become irritable or restless. The individual may also feel anxious or become paranoid as a result of his or her drug use. In extreme cases, the person experiences auditory hallucinations as part of an episode of cocaine psychosis. This problem is more likely to affect long-term, regular users of the drug than a person who only uses it occasionally.

Dangers of Cocaine Use: Mixing with Other Drugs

If you take cocaine and drink alcohol at the same time, you are risking very serious injuries and increase your chances of developing deadly liver diseases. Recent research shows that alcohol and cocaine combine in the liver during the digestion process to form cocaethylene, which stays in the body for a long period of time and is more toxic than either alcohol or cocaine alone. Unfortunately, death due to the poison created by the combination of alcohol and cocaine is not uncommon, as many cocaine users will drink while they snort, swallow or inject the drug.

Dangers of Cocaine Use: Binge Use

Binging on cocaine means that an individual takes the drug repeatedly in a short amount of time. This can cause restlessness, irritability and feelings of panic. Coming down after the euphoria of a binge can feel profoundly depressing requiring more of the drug to be taken to come back up. Binge use can also trigger paranoia and drug induced psychosis. This can lead to a full-blown paranoid psychosis, in which the individual experiences auditory hallucinations and loses touch with reality.

Dangers of Cocaine Use: Freebasing

Freebasing is the term used for when cocaine is smoked. It is extremely dangerous. Not only is the drug far more addictive when it smoked causing addiction to develop sooner, but the act of freebasing is physically dangerous. Many individual have suffered severe burns when their freebase explodes.

When freebasing, cocaine reaches the brain extremely quickly in a rush, usually within seconds. This results in a sudden and intense high.  But the high quickly goes away, leaving the addict with an uncontrollable urge to freebase again over and over.  The dose needs to keep being increased, as does the frequency to satisfy this craving, resulting in addiction and physical debilitation.

Dangers of Cocaine Use: Crack

One form of freebase cocaine is called crack or crack cocaine. Crack is a street term. Crack is not sold as white powder but as small lumps or shavings. It crackles when it is heated hence the name. Crack produces the same debilitating effects as freebasing cocaine.  Crack use is a huge problem in many cities because it is inexpensive, easily moved around and sold. It usually comes in small vials or folded tinfoil.