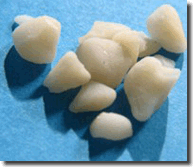 What is crack cocaine?

Crack cocaine is a highly addictive and powerful stimulant that is derived from powdered cocaine using a simple conversion process. Crack emerged as a drug of abuse in the mid-1980s. It is abused because it produces an immediate high and because it is easy and inexpensive to produce--rendering it readily available and affordable.

How is crack cocaine produced?

Crack is produced by dissolving powdered cocaine in a mixture of water and ammonia or sodium bicarbonate (baking soda). The mixture is boiled until a solid substance forms. The solid is removed from the liquid, dried, and then broken into the chunks (rocks) that are sold as crack cocaine.

Crack typically is available as rocks. Crack rocks are white (or off-white) and vary in size and shape. How is crack cocaine abused? Crack is nearly always smoked. Smoking crack cocaine delivers large quantities of the drug to the lungs, producing an immediate and intense euphoric effect.

Individuals of all ages use crack cocaine--data reported in the National Household Survey on Drug Abuse indicate that an estimated 6,222,000 U.S. residents aged 12 and older used crack at least once in their lifetime. The survey also revealed that hundreds of thousands of teenagers and young adults use crack cocaine--150,000 individuals aged 12 to 17 and 1,003,000 individuals aged 18 to 25 used the drug at least once.

Crack cocaine use among high school students is a particular problem. Nearly 4 percent of high school seniors in the United States used the drug at least once in their lifetime, and more than 1 percent used the drug in the past month, according to the University of Michigan's Monitoring the Future Survey.

What are the risks of using crack cocaine?

Cocaine, in any form, is a powerfully addictive drug, and addiction seems to develop more quickly when the drug is smoked--as crack is--than snorted--as powdered cocaine typically is. In addition to the usual risks associated with cocaine use (constricted blood vessels; increased temperature, heart rate, and blood pressure; and risk of cardiac arrest and seizure), crack users may experience acute respiratory problems, including coughing, shortness of breath, and lung trauma and bleeding. Crack cocaine smoking also can cause aggressive and paranoid behavior.

Yes, crack cocaine is illegal. Crack cocaine is a Schedule II substance under the Controlled Substances Act. Schedule II drugs such as PCP and methamphetamine have a high potential for abuse. Abuse of these drugs may lead to severe psychological or physical dependence.